Undercover German journalists claim there is a booming trade in documents after they found an asylum seeker trying to sell them his German-issued ID.

Undercover German journalists claim there is a booming trade in documents after they found an asylum seeker trying to sell them his German-issued ID.

The research was carried out by the tabloid paper Bild, who carried out an investigation to find out if asylum seekers were using a Facebook group called Bahnhof auf dem Weg nach Hause (Railway Station on the Way Home) to sell their German Identity cards.

Journalists Hamza Jarjanazi and Maximilian Kiewel wrote to one of those offering papers, a 25-year-old Syrian asylum seeker, identified only as Yunes due to privacy laws, and set up a meeting with him in Frankfurt in the mid-western German state of Hesse.

Reportedly Hamza posed as a Syrian named Omar who wanted to help his bother in Greece to get into Germany.

Yunes sent him a picture of his refugee travel document called the “blue passport,” issued by the Foreigners Registration Office in March 2017, which is valid for three years.

The asylum seeker told the undercover journalist his brother could use the document to enter the country.

When Hamza expressed concern over the phone about the scheme working, Yunes reportedly reassured him saying: “Don’t worry about it. My friends have tried this. It definitely works.”

Hamza then met with Yunes, accompanied by Maximilian who secretly recorded the meeting on a hidden camera.

He even offered to show Hamza a good time.

He said: “I know a great woman who can massage you everywhere. There are awesome night clubs everywhere here in Frankfurt. Let’s spend the day together.”

When Hamza declined, Yunes handed him the papers, then demanded the cash and started counting it.

At this point, both journalists revealed their identity and confronted Yunes about the crime he was committing and the possibility of criminals such as terrorists using his papers.

The asylum seeker then changed his story and said the money was for his sick sister in Syria and apologised saying: “I’ve learnt a life lesson, I’m really sorry.”

He later sent a text swearing he was “never going to do something like that again.”

German authorities confirmed that terrorists often use “German refugee papers” to smuggle potential attackers into Germany or other European countries. 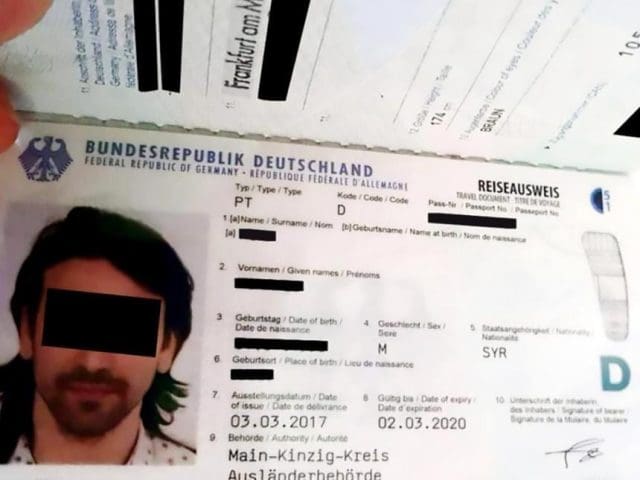