US Tourist Attacked By Traders In Barcelona – Unzensuriert
Skip to content
DEUTSCHLAND
.AT

An American tourist wants to protect a woman and is beaten up by African street sellers.

US Tourist Attacked By Traders In Barcelona

This is the shocking moment am American tourist who tried to stop a woman being abused is hospitalised after being attacked and whipped with belts by street traders in the centre of Barcelona.

Unlicensed street traders known as “manteros”, who are mostly immigrants, often set up stores on the streets in Spanish tourist hotspots to sell their products. The startling scenes were recorded by an onlooker in Plaza de Cataluna in central Barcelona, in Spain s Catalonia region.

In the video, a group of street sellers can be seen punching the unnamed American tourist, reportedly aged 45, as he tries to get away. One of the gang kicks the tourist s leg as he backs away from the scene before another street seller comes running at the American man with a belt in his hands. The street seller then repeatedly whips the tourist with the belt and the American man runs away across the road as onlookers try and stop the attack. Two of the street sellers with belts in their hands can be seen approaching another man in the square before the video shows the original tourist being attacked again on the other side of the road.

Local media report that the fight began when the American tourist defended a woman who was being insulted by the street sellers after she told them they had not left enough space for her to cross the road with her pram.

The victim was reportedly treated in a local hospital as he was bleeding after the attack and was discharged some hours later, according to local media. The tourist did not report the case to the authorities and police are trying to find him, according to reports.

No arrests have been reported. 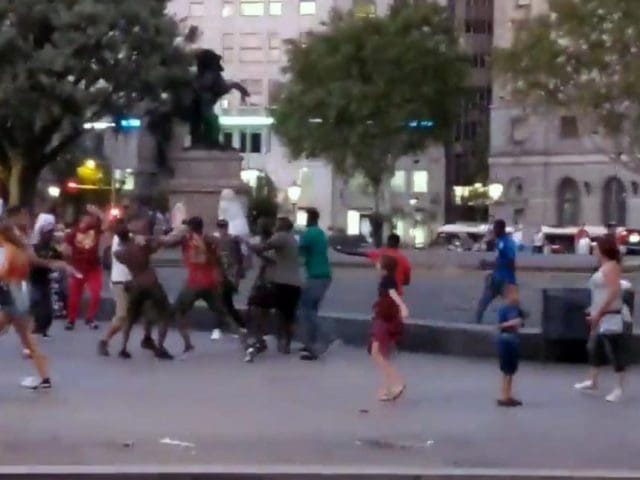