This is the moment a burka-wearing man robs a bank with a toy gun in broad daylight.

The incident took place in the Hawalli Governorate of eastern Kuwait. The suspect was arrested shortly after the robbery. The unnamed man is Jordanian and has reportedly confessed to the bizarre robbery. Police have managed to recover some of the cash and confirmed that he held up the bank wearing a burka and brandishing a toy gun.

According to local media, the suspect studied the Gulf Bank branch for one month before entering as a Muslim woman with the intention of robbing it. He chose a convenient time to carry out the crime and disguised himself with a burka, handbag and a toy gun he reportedly bought for 3 KWD (7 GBP).

The suspect was aware that bank tellers are instructed not to resist during an armed robbery, and he reportedly told staff that there were three snipers positioned outside should anyone follow him during his escape. He carried out the robbery to pay his rent, according to local media. The Gulf Bank branch confirmed that the unusual robbery took place on social media, adding that no one was hurt.

In the footage, the burka-wearing man is seen brandishing a toy gun at bank tellers while instructing them to put cash into a paper bag. He then grabs the bag and swaggers out of the bank before sprinting away when outside.

This is not the only case of criminals dressing in Islamic head coverings to disguise themselves during a robbery. In July, an armed robber who disguised himself as a Muslim woman by wearing a dress and Hijab robbed a bank in the Austrian city of Linz. Two weeks previously, local media reported an armed man wearing a burka and sunglasses who attempted to rob a bank in the Austrian capital of Vienna. 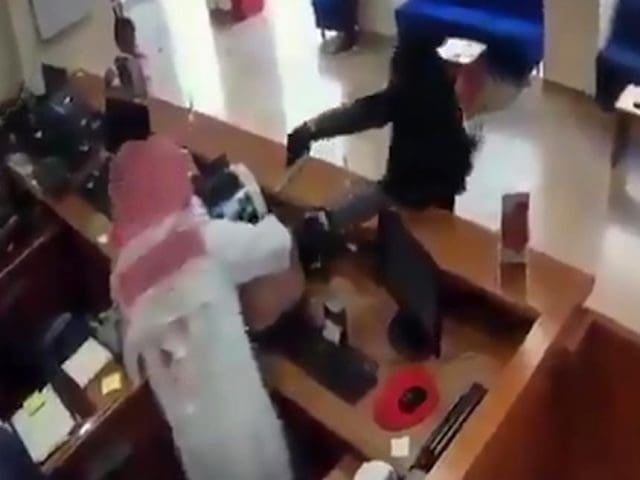