The incident happened yesterday in The Hague, a city in the Netherlands and the country s seat of government. The man reportedly shouted “Allahu akbar”, Arabic for “God is (the) greatest”, multiple times while holding a large canister of gas in his car, which was parked in the garages of the local public transport company. The man is said to have released some of the gas from the canister when onlookers walked past, triggering a terror scare.

An anti-terrorist SWAT unit was immediately dispatched to the area, with multiple snipers on rooftops and in the streets pinning the man down, according to local media. One witness said: “Within minutes there were dozens of cops.” According to reports, the terror suspect had to undress on the street before the cops moved in to arrest him.

The man s black Volkswagen Polo was searched by explosive experts but was given the all clear. The gas canister found in the car allegedly turned out to be filled with nitrous oxide, commonly known as laughing gas. A camouflage jacket and some balloons were reportedly found in his car. Balloons are commonly used by youngsters to fill up with laughing gas, after which they inhale it from the balloon, creating a mild sensation.

Suspect is a 22-year-old man

According to the police, the suspect is a 22-year-old man from the nearby city of Zoetermeer. His name and nationality were not publicly shared. The suspect was released today by the police after they could not establish any terrorist links or a criminal act, according to reports.

In May, three people were stabbed in the Hague by a 32-year-old Syrian asylum seeker named Malek F. as they celebrated the anniversary of the end of the Nazi occupation. He was also heard to be shouting “Allahu Akbar”. 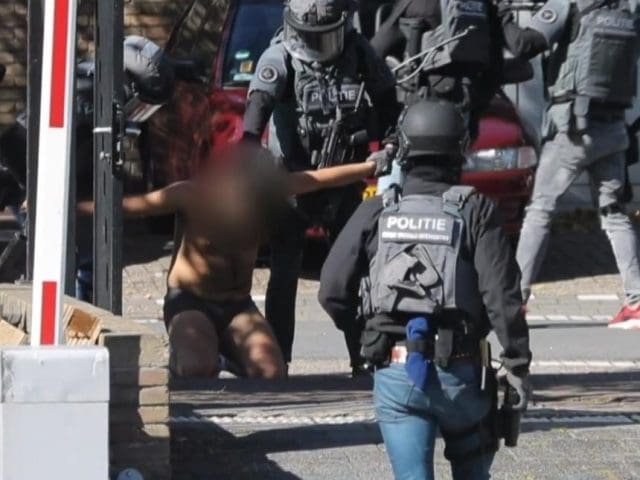