UK-bound migrants and streets gangs are turning a park opposite the Belgian Immigration Office into a giant prostitution zone.

UK-bound migrants and streets gangs are turning a park opposite the Belgian Immigration Office into a giant prostitution zone where people can have sex for as little as 17 GBP.

The bizarre situation is unfolding in the Maximilian Park in the Belgian capital of Brussels, located directly opposite the country s Immigration Office. For years, the park has been a refuge for thousands of rough-sleeping migrants who use it as a base to find a way to reach the United Kingdom.

According to local media, some migrants are now teaming up with local youth gangs by selling drugs, stolen goods and weapons. Reportedly, one of the most lucrative trades is prostitution as pimps from the nearby red light district next to the Brussels North railway station are currently sending more women towards the park to offer their bodies to the many migrants.

A police officer said: “There they have sex with the UK-bound migrants for a small price of maximum 20 to 25 EUR (17.6 to 22 GBP). “Most of the men who stay there are young people in their twenties who have been away from home for months. They also need a bit of fun at times.”

According to local media, the police patrol the area day and night but are unable to stop the dark trades in the park and can only watch as the violence and criminal acts continue to rise. An internal police report states that criminal gangs are renting out places in the park for 10 EUR (8.8 GP) where the migrants can have sex with the prostitutes.

These places can range from public toilets, tents, hidden areas in between the park greenery to cellars at nearby blocks of flats. In exchange for 10 EUR, members of the gangs stand guard and send away passersby so the migrants can have sex undisturbed.

Mario Thijs of police union NSPV said: “The police intervention teams know most members of the youth gangs because they live in the flats directly behind the park and they have often had contact with the police and judiciary. “With the arrival of the UK-bound migrants they found a lucrative livelihood close to home.”

Police spokeswoman Ilse Van de Keere of the Brussels Police said that “we have had permanent checks in the area since summer”. She said: “Criminality is of course strictly dealt with. Is there more violence? That is being said, but I don t have objective numbers about that.”

Police officer was slashed in his face

Last month, a police officer was slashed in his face with a knife while he tried to overpower a migrant during a check. Other cops then opened fire, injuring the migrant by shooting him in his chest and leg. Union chief Thys said that the cop has not yet healed from the injuries he sustained in the attack.

Interior Minister Jan Jambon and State Secretary and Secretary of State for Asylum and Migration Theo Francken, who are both from the Flemish Nationalist N-VA party, started a special action plan against UK-bound migrants earlier this month .

Dismantling of the makeshift camps

One of the spearheads of the plan is the dismantling of the makeshift camps in Maximilian Park. Francken said: “These people do not want asylum in Belgium and want to travel onwards to the United Kingdom. I do not shelter illegal migrants. Those people I will lock up and send back if they do not leave voluntarily.”

The migrants, mainly hailing from east African countries such as Sudan, Ethiopia and Eritrea, are not interested in asking for asylum in Belgium but all hope to reach the UK. 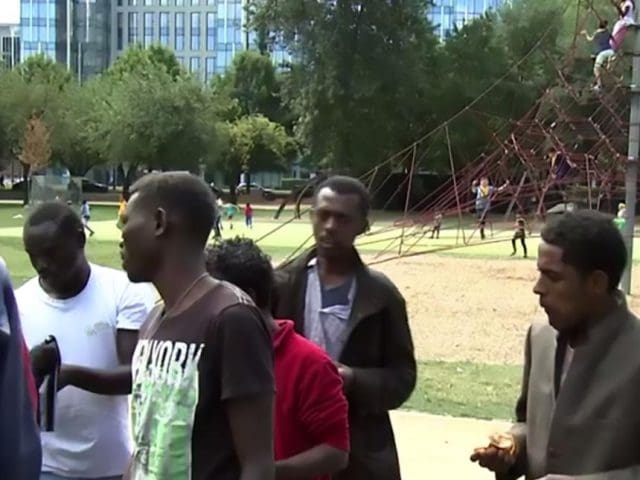