9-11 Terrorist Happy And Grinning On Deportation Flight From Germany To Morocco – Unzensuriert
Skip to content
DEUTSCHLAND
.AT

Moroccan national Mounir el-Motassadeq, 44, grinning after his incomprehensible release from jail in the north-german city of Hamburg.

The Moroccan 9-11 accomplice who has been deported from Germany in an early release from prison has been snapped grinning and happy on his deportation flight.

Moroccan national Mounir el-Motassadeq, 44, was convicted of being an accessory to the 9-11 terrorist attacks and was seen smiling on his deportation flight from Frankfurt in the west-central German state of Hesse to Casablanca in central-western Morocco.

El-Motassadeq was deported on the scheduled flight AT811 in a Boeing 737-800 with Moroccan national carrier Royal Air Maroc.

Germany s Special Deployment Commando picked him up from the northern city of Hamburg where he was imprisoned and accompanied him on the plane.

According to local newspaper Bild, the rest of the passengers had to wait while El- Motassadeq was boarding the plane.

He reportedly sat in seat 31 E with handcuffs and two officers sitting either side of him, with another one in front of him and one more behind him.

In the photos he can be seen grinning widely as he looks at the camera. Bild reported that he was polite and even smiled at a little girl who was headed to the toilet with her parents.

According to Bild, he has a wife and children back in Morocco.

A businessman from Frankfurt complained that it was “not a nice feeling” to be on board the same plane as the terrorist.

He said: “Had I known about him, I would have changed the booking.”

El-Motassadeq was found guilty of 246 counts of accessory to murder for the passengers who were on the four hijacked planes and who were killed in the 9-11 attacks. He was sentenced to 15 years in prison on 8th January 2007 in Hamburg, where he was imprisoned on 2nd May 2007.

This August, word of his early release got out. After his homeland signalled they would take him back upon his release, his replacement documents arrived in Germany last Friday.

According to Bild, he has now been banned from re-entering Germany until April 2064. 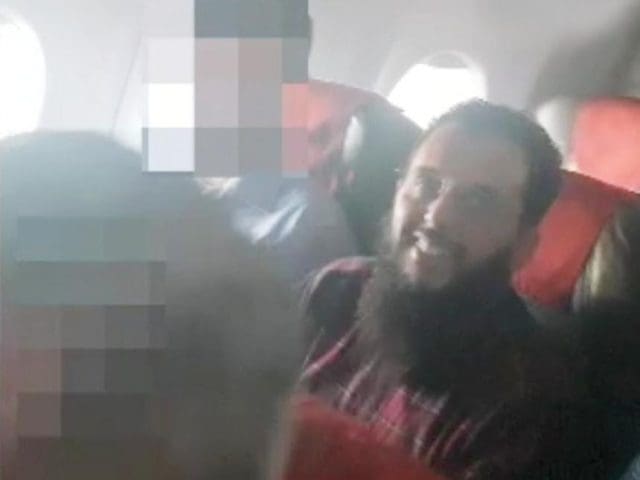