Anti-migrant feeling in Turkey is on the rise.

Anti-migrant feeling in Turkey is on the rise with one shopkeeper praised after he put a sign up saying that Iranian, Syrian or Afghani customers were banned and will be beaten up if they try to come inside. The sign was accompanied by flags from the respective countries making it crystal clear what the intentions are of the 23-year-old owner of the shop in Merkezefendi district, which is in Denizli Province in south-western Turkey.

Alongside the flags is the message: “Iranian, Syrian and Afghani customers cannot enter this shop, they cannot buy goods, if they enter they will be beaten.” The shopkeeper who was identified only by his initials as I.O. was unrepentant despite the images of the sign going viral after an immigrant posted them online, and local police acting on complaints confirmed that he had been arrested and questioned.

A police spokesman said: “Officers visited the shop, and removed the sign and arrested the shopkeeper. He faces a trial for incitement of racial hatred .”

Most of the comments on social media in Turkey praised the shopkeepers attitude. Umit Tatli said: “I would like to know who it was that complaint, because as far as I can see online everyone has congratulated this man, so what is your problem that you report the opposite?”

And Egedeniz Cosgun said: “We don t want refugees walking on our streets, we should round them up and put them in camps where they will be fed and then we can leave it at that.”

And Aziz Gemi added: “I for one and supporting the shopkeeper!”

Critics included Byaram Koc who said: “Shame on you, this is not a banana state, we have millions of Turks abroad, if this is where we treat immigrants and help can they be treated when they are abroad? This is racism, you may not like them but you are managing a shop open to the public and you should accept them.” 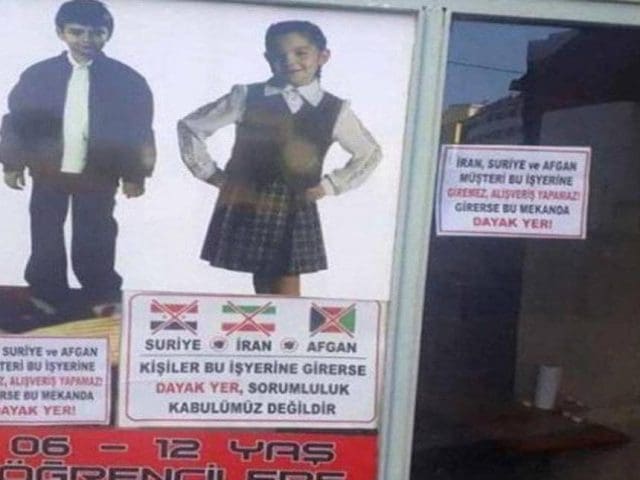