778 Residents Of Alpine Village Fed Up With One Million Chinese Tourists In One Year – Unzensuriert
Skip to content
DEUTSCHLAND
.AT

Even the street signs in Hallstatt are in Chinese letters and many visitors think the village is a theme park.

The mayor of the picture postcard Austrian village Hallstatt with just under 800 residents says life is being made unbearable for locals by a million tourist visitors a year.

They complain that they cannot move now for the flood of tourists arriving on up to 80 buses a day at the UNESCO-listed village, and that life is becoming unbearable despite the huge amounts of money that the more than one million tourists a year bring with them.

Of these, 150,000 managed to squeeze themselves into accommodation locally ensuring the village is packed day and night.

Streets are blocked with cars and buses, and only last week a Chinese tourist was run over and critically injured when he stepped in front of a small lorry being driven by a local.

The village nestles on the side of a mountain in the district of Gmunden in the northern Austrian state of Upper Austria, bordered on the other side by a lake of the same name.

But it has only 778 residents, and every day 10 times that number of tourists turn up mostly from China to be photographed and explore the winding streets of the picturesque village.

The visitors bring a lot of income for the village, which includes one euro per use of the toilet which alone generates 150,000 EUR (132,000 GBP) per year, which is just a fraction of the over 4 million EUR (3.53 million GBP) the village is now earning from tourism. The money among other things subsidises a permanent bakery in the tiny village, as well as a supermarket and a doctor.

But the supermarket has little of the day-to-day household produce that locals need, mainly concentrating on snacks and drinks for the tourists.

Locals also complain that they have to stand in long queues every time they want to buy anything and the prices are far more expensive than anywhere else in the region, as it is always packed with tourists who do not care about the prices.

Many of the visitors themselves are even surprised that people really live in the village which many mistakenly assume is some sort of theme park.

Until a few years ago, tourism numbers were manageable, but that was before Chinese architects turned up to photograph and record every detail in order to recreate a Chinese version of the village in Guangdong province.

The Chinese version is a major tourist attraction there in its own right, especially popular as a romantic wedding location or for cultural functions such as music concerts, where it is mixed in with Disney-like images of fairytale princesses and even the Sound of Music features in the Chinese Hallstatt, despite the musical having been filmed in the Austrian city in Salzburg.

This matters very little now to the Chinese tourists who have made a visit to the village one of the number one destinations on their bucket list when visiting the Alpine republic.

One Chinese visitor, identified as Lien Bo, told local media with a laugh: “Everybody in China knows Hallstatt.” She was happy to show images from her mobile phone which show social media in China packed with photos of the village.

Although the Chinese initially denied that they were building a copy, when photographs were published in Western media they admitted to it, and from that point on the tourists and the money has flooded in but Mayor Alexander Scheutz of the Social Democratic Party has said enough is enough.

He told local media: “Residents in the town centre can no longer stand to look at the crowds of people passing through it every day.”

Scheutz also stressed that there is growing pressure to do something about the volume of tourism, and they were desperately reviewing their options.

Online commentators compared living conditions to being like animals in a zoo with people coming to peer at them, and also complained that especially the Chinese visitors have no respect for property, wandering wherever they wanted to take photographs. 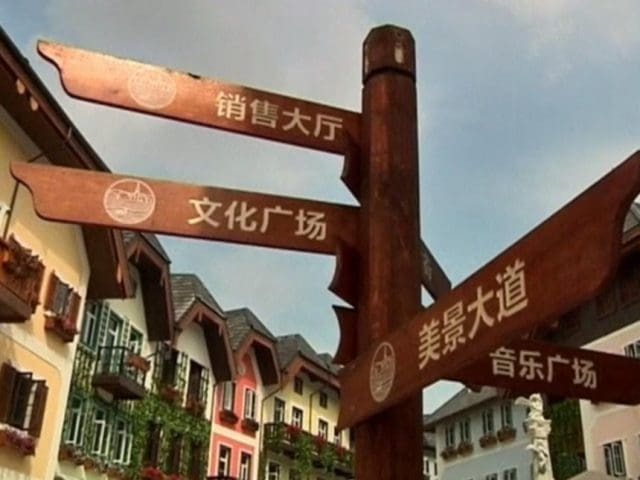