A group of migrants walking along a motorway in France suddenly throw a traffic cone at a passing lorry driver and smash his windscreen.

This is the moment a group of migrants walking along a motorway in France suddenly throw a traffic cone at a passing lorry driver and smash his windscreen. Polish lorry driver Maciej Pater uploaded the footage to Facebook where it has been viewed 2.1 million times.

In the footage, filmed from his dashcam as he drives along an unspecified French motorway, a group of immigrants run across both lanes in front of the vehicle and target the driver for no apparent reason. One of them throws a traffic cone at his cab and the marker crashes against his windscreen, cracking the glass.

The lorry driver wrote on social media: “I am letting you know about this situation, a matter that concerns me directly as a lorry driver travelling around Europe. “This movie-like situation took place in the middle of the day just before noon. About 50 metres from my lorry, there was a French police car parked up. I was shocked”.

“The situation is swept under the rug as though nothing happens. Think about what would happen if a lorry driver like me paid for this with their life. ” Pater then claimed that similar situations are becoming more frequent. Netizen Mariusz Krasinski commented: “Run them over.” Wojciech Cwikla said: “You should not slow down, drive faster.”

It is unknown whether an official complaint has been lodged with the French authorities. 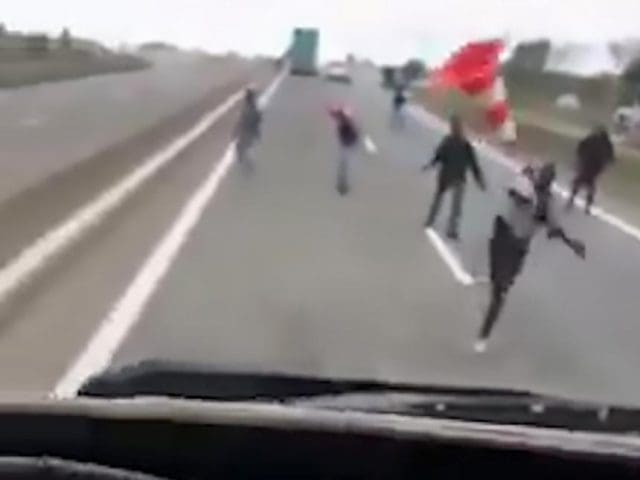