A fishing supervisor discovered a car49 years after being stolen.

This clam-covered car has been fished out of a river 49 years after being stolen by a thief who never revealed its location.

The black Puch 500 car stolen back in 1969 has been fished out of the Drava river in the Voelkermarkt District of the southern-most Austrian state of Carinthia. According to police, the car belonged to a woman now 69 years old who had it stolen from her in the town of Diex also in Carinthia. They reported that the car thief s identity was known but he refused to disclose the car s location.

Discovered by a fishing supervisor

A fishing supervisor discovered the car about 500 metres (1,640 feet) off a flood arch with the rear end poking out of the water and the rest of it stuck in the river bed. The car was visible as the river had been drained to prevent flooding. The car can be seen covered with clams on the parts sticking out of the river. Firefighters later pulled it our of the river, according to reports.

Puch was an Austrian company based in Graz that produces cars, motorcycles, mopeds and bicycles.

The stolen Puch 500 became visible due to the water of the Drava river and lake Voelkermarkter Stausee, the lake which it flows into, having been purposefully drained by over four metres (13 feet) as a precautionary measure ahead of expected heavy rainfall. 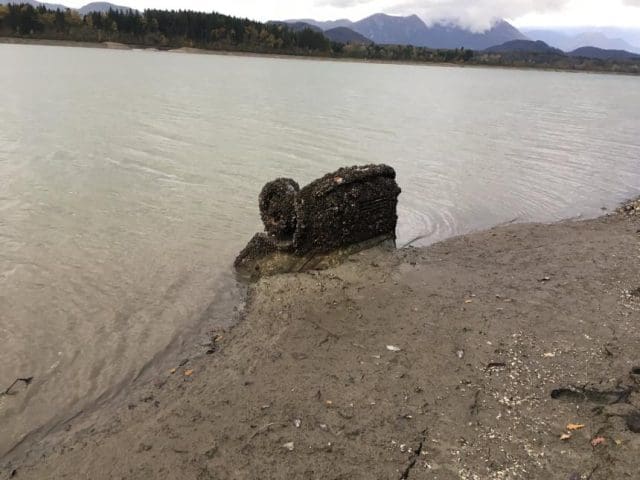