Austria s Interior Minister has revealed a plan which would see all migrants who have arrived in Europe with the help of human traffickers be automatically denied asylum.

Austrian Interior Minister Herbert Kickl of the far-right Freedom Party of Austria (FPO) told local media that every migrant using the services of human traffickers should get an automatic negative asylum decision in the future. Kickl said that he hopes that Austrian laws would soon be adapted
accordingly to make his plan possible. Kickl said that whatever happened: “It should head in this direction.”

According to the Austrian minister, it is not fair that someone who can afford the services of human traffickers has more chances of asylum than others who cannot afford to pay them.

Chancellor: “It is not the poorest who flee”

Austrian Chancellor Sebastian Kurz of the conservative Austrian People s Party (OVP) recently hinted at a similar idea. Kurz said: “It is not the poorest who flee, but those who can afford human traffickers.”#Austria s youthful Chancellor, who at the age of 32 is the youngest head of government of any European country, said that it was a mistake that the whole of Africa had been given the impression that “these people can get through to Europe”.

According to Kurz, this has directly lead to the “dead people in the Mediterranean” and makeshift camps in Libya where African migrants are “enslaved and tortured” by local strongmen preying on the vulnerable situation of those wanting to reach Europe. Kurz said: “We have to smash the business model of the human traffickers.”

Austria: Presidency of the Council of the European Union

The Austrian government, which currently holds the Presidency of the Council of the European Union, which is rotated among EU member states every six months, has made it a priority to discuss the migration crisis at the European level.

On Tuesday, Vienna will host an EU-Africa forum in which Kurz said he hopes to discuss the strengthening of the economy on the African continent to take away the root causes of migration. Kurz said: “It is our Christian-social responsibility to make the conditions there better.”

The Chancellor praised Siemens for its promise to invest 500 million EUR (451.5 million GBP) into the creation of jobs on the African continent. Kurz said this is important because every year “18 million new jobs” must be created in Africa “because the population explosion is so dramatic”.

Since assuming office on 18th December 2017, Chancellor Kurz and his FPO coalition partners have introduced strict anti-immigration measures and slashed benefits for new arrivals in the country. Another recent measure proposed by the Austrian Government is a plan to seize migrants cash upon arrival in the country which will go towards their initial care.

The tightening of asylum laws also includes the power to confiscate asylum seekers mobile phones which would allow investigators to access the phone s geodata to determine their origin and exact journey. 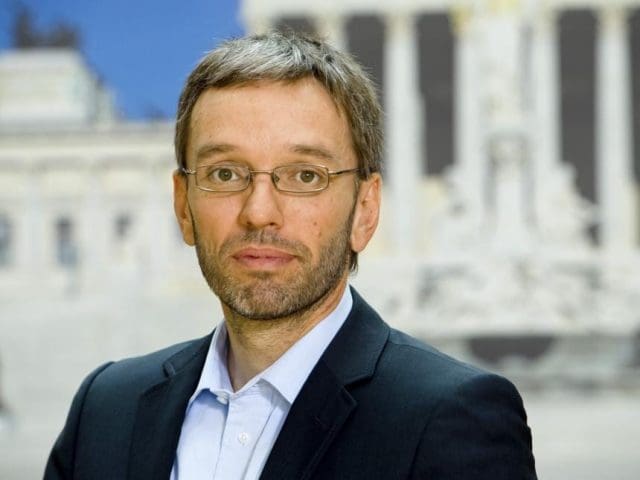