Good Chances For Swiss Campaign To Ban Muslims From Praying In Public – Unzensuriert
Skip to content
DEUTSCHLAND
.AT

Mosque in Wangen bei Olten, Switzerland: The construction of minarets is forbidden in the country, now conservative politicans call for a ban of Muslim public praying.

Conservatives and secular activists in Switzerland have called for a ban on Muslims praying in public to prevent the country becoming a “Muslim ghetto like you see in Belgium”.

The plan to introduce a Muslim public praying ban was first proposed by political activist and atheist Giorgio Ghiringhelli, according to local media.

Ghiringhelli, who was also the leading proponent of a successful referendum in the Italian-speaking region of Ticino, has reportedly filed a petition at the cantonal parliament in Bellinzona.

On his website The Killjoy , Ghiringhelli shared pictures of Muslims praying in public in the street, backing up his point that Ticino is slowly becoming ‘Ticinistan’ as he now refers to it.

A parliamentary committee has already rejected Ghiringhelli s petition and a full session of the cantonal parliament is expected to do the same, according to reports.

However, Ghiringhelli threatened to launch a popular initiative calling for a canton-wide referendum like he did previously for a face-covering ban.

To bring the initiative to a ballot, he reportedly has 100 days to gather 7,000 signatures from eligible voters.

Politicians of the conservative Swiss People s Party (SVP), the largest in the country, have backed Ghiringhelli and even called for a nationwide ban.

MP Andreas Glarner said that he is working to prohibit Islamic public prayers and said that it is important “as a sovereign state to put an end” to the alleged problem.

He referred to Belgium where he believes mass public prayers have already become a “problem”.

Glarner said: “When we look at other countries, we can see what threatens us. In Belgium, problems with Muslim ghettos are already evident today.”

Glarner is a member of the so-called ‘Egerkingen Committee’ made up of members of the SVP and the Federal Democratic Union of Switzerland (EDU/UDF), a conservative Christian party.

The group made headlines by successfully holding a referendum calling for a ban on the construction of minarets in the country. It passed in 2009 with 57.5 percent of the vote.

In 2017, the Egerkingen Committee announced that it had over 100,000 signatures required for a referendum on a possible burka ban.

However, no date for a public vote has been scheduled yet.

Besides the canton of Ticino, St Gallen has banned the burka, niqab and similar face covering garbs following a regional referendum.

A poll in 2016 showed that 70 percent of Swiss voters would support a nationwide ban. 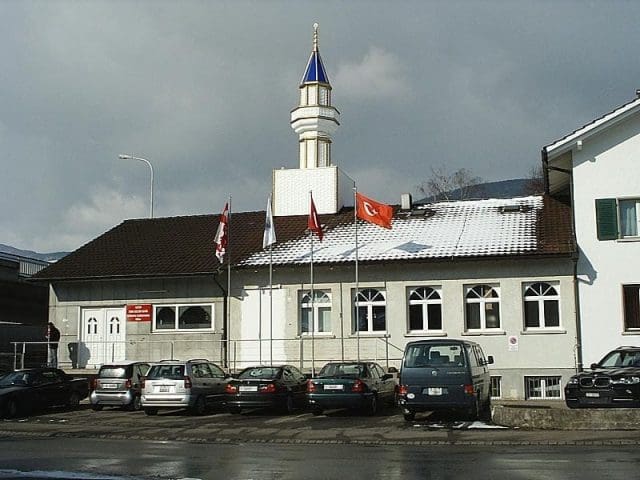